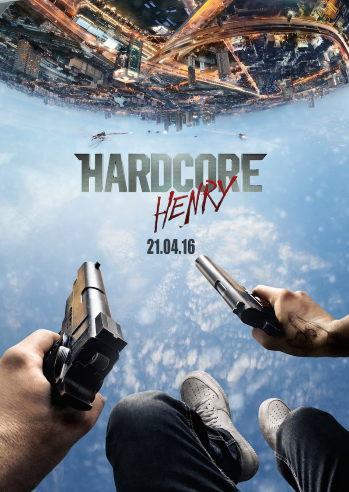 Henry is not having a good time.

Henry has woken up with amnesia, some chest scars, slight color-blindness, and two of his limbs missing. A woman introducing herself as his wife Estelle fills in the blanks; Henry was beaten to hell and back, and almost died. She, an augmentation scientist, did her best to repair his body, using synthetic organs and body parts to bring him back and make him stronger than he was before. She slips his wedding ring back onto his finger and tenderly tells him that, even though he doesn't remember her at all, that she loves him.

Then a bloodthirsty albino guy with telekinesis named Akan breaks in with a small army in tow, kills the other scientists, and kidnaps his wife.

Henry finds himself in the middle of Moscow, hunted by hundreds of Akan's assassins, and backed up by a British agent named Jimmy who inexplicably knows Henry and also keeps dying and coming back with each one having wildly different personas and skill-sets. Henry knows how to use every gun and weapon he comes across, is a parkour master, has superhuman strength and stamina, and is hellbent on getting his wife back.

Did we mention that the audience sees all of this through Henry's eyes?

Heavily influenced by First-Person Shooter games, Hardcore Henry made a splash at various film festivals with its revolutionary concept, gonzo nature and fast-paced, fun approach to the action genre. It won't surprise anyone then, that it did actually get some early cross-promotion with PAYDAY 2 as a tie-in (and shared universe, of sorts). The tie-in features Jimmy as a playable character and two heists, both of which takes place before the film does; one has you sneaking around a mercenary base to steal an EMP device, and the other has you collecting and stealing data on superhuman experiments before Akan can get his hands on it.

"This is fucking war, baby!"