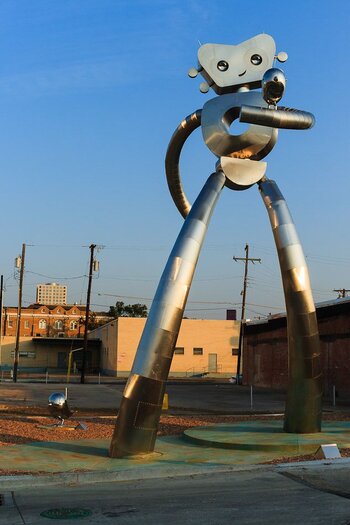 The Traveling Man by Brad Oldham, Brandon Oldenburg, and Reel FX Creative Studios
The Encyclopaedia Galactica defines a robot as "a mechanical apparatus designed to do the work of a man." The marketing division of the Sirius Cybernetics Corporation defines a robot as "Your Plastic Pal Who's Fun To Be With."
— The Hitchhiker's Guide to the Galaxy
Advertisement:

Mechanical beings brought to life to serve man and hopefully not enslave him: Robots. Robots are one of the staples of science fiction literature, though they have spread beyond it into multiple other genres. So what is a robot? In fiction, a robot is usually a mechanical being that has been built in order to complete some task. The occasional use of the nonfictional variety of robots, which are basically complex machines, can also be seen in fiction in the form of non sentient devices such as a Surveillance Drone. See also Sliding Scale of Robot Intelligence.

The word's origin lies with Karel Čapek, a Czech writer and playwright who coined the term in 1921 with his play R.U.R.—although ironically, Čapek's robots were Artificial Humans, not mechanical beings. The name is derived from the Czech word robota, meaning serf labour. The concept of the "mechanical human" itself is much older; in memory of the tale from Classical Mythology that Hephaestus, the God of smithcraft, had built machines that moved of their own accord and worked for him, such a being was called an automaton before the word "robot" came into use. Since a clear distinction between technology and magic is a fairly modern convention, the automaton has originally an inherent relationship to the Golem.

In early fiction revolving around robots, they were generally labourers or workers who Turned Against Their Masters in a Robot War. However, the author Isaac Asimov found this idea to be absurd: A robot would be designed to work for humans and would never be given the capacity to work against them, thus codifying the three laws of robotics. Over the century, the use of robots in fiction has gone in multiple different directions, leading to a very widespread trope that is difficult to pin down exactly.

As a very common supertrope, Robot lists its subtropes below in index format. For an even more comprehensive list noting related tropes, see also Robot Roll Call. Compare Artificial Human, Spaceship Girl and the various Cyborgs. And of course, beware the Robot War.