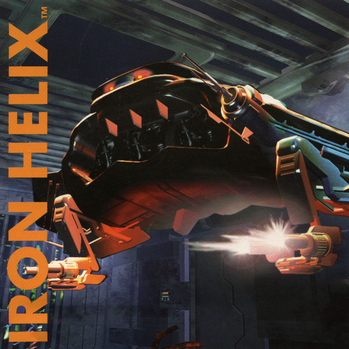 Iron Helix is an Adventure / Survival Horror hybrid game developed by Drew Pictures, published by Spectrum Holobyte, and released in 1993 for Mac, Windows, and Sega CD.

Sometime in The Future, Earth is locked in a cold war with an alien race known as the Thanatosians. Somewhere in a classified sector of space, a powerful Human ship — a Cereberus-class vessel known as the SS Jeremiah Obrian — is carrying an extremely powerful weapon to test in war game scenarios.

Enroute to their destination of an uninhabited planet to test their weapon on, the Obrian suddenly alters its course to Calliope, a Thanatosian world. The Obrian plans to unleash the weapon on Calliope, which will trigger a war between Humanity and the Thanatosians which could span the entire galaxy.

The Obrian's crew desperately tries to override the ship's navigational computer but finds that the computer no longer recognizes their DNA and ignores their commands. Now believing them to be intruders, the ship activates its defense mechanism, an armed security drone known as the Defender, which eliminates the crew one-by-one.

None of Earth's other ships are close enough to reach the Obrian before it reaches Calliope. In a last-ditch effort, Earth's military sends out a distress signal across all Human channels, hoping to reach someone, anyone, that can reach the Obrian and stop it. Luckily, a small science vessel known as the Indiana just happened to be drifting by.

Using the Indiana's Tractor Beam, the pilot is able to latch onto the Obrian and send in a remotely-piloted probe to hopefully stop the cruiser from reaching its destination.