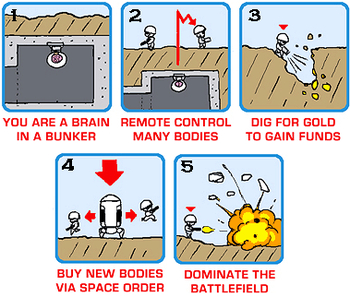 Simple instructions
Mine precious gold from the deformable pixel terrain in order to buy more and better ships, soldiers, weapons, digging tools, and deployable defenses. Use these assets to defend your disembodied brain and bankrupt your opponent! Old-school 2D sidescroller pixel graphics coupled with an extremely detailed physics simulation makes for a mix of nostalgia and surprising gameplay.
— Product Description
Advertisement:

So in the future, you're a Brain in a Jar, on a Worms-like 2D battlefield controlling Mooks. You're competing with other factions on a new, Earth-like planet to find resources and ship them back to civilization, or at least whatever you have left, since you spend pretty much all your money on weaponry. Notable for having an impressively advanced physics and destruction engine, which can allow for a variety of emergent gameplay.

The game spent the majority of its time in the public in an unfinished beta state. Created by Data Realms, the Retraux game spent several years as a demo with several test levels, some of which had a six minute time limit, making it in essence a sophisticated toy. Regardless, Data Realms encouraged players to buy the game while in its development stage, for a reduced price than that of the finished game, a model also used successfully by Mount & Blade and (On a cheaper scale) Minecraft. Cortex Command 1.0 was officially released on Steam on September 28, 2012, with a new faction and improved campaign mode.

The game features a slowly growing single player campaign with five scenarios currently available. There are several levels available for skirmish mode, and the game features splitscreen multiplayer but no online element. The creator is currently focusing on expanding the campaigns and code for the game while having additional staff work on content

as the code rolls out. The game also has a very active modding community and a wide variety of mods that add or change many features in the game as well as adding campaign missions and skirmish areas.

The Steam release (and beta Build 27, released several months prior) introduced the campaign mode, which up to four teams compete for control of the planet. A slider allows for determination of the number of mining sites and brains in a game (effectively controlling the game length), with teams capturing and holding said sites to generate income so they can build elaborate defensive installations for their sites, and launch massive assaults to take a site from their foes. The winner is whoever seizes total control of all the sites on the planet and kills all the brains of the enemy.

The link for the fan forums which also houses the mod community: Forums & Mod Community