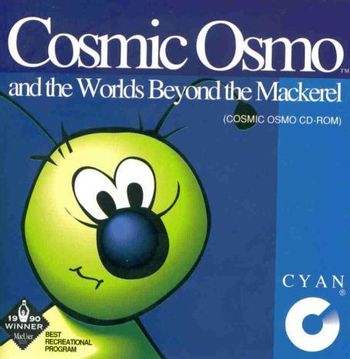 "You are the busiest alien to ever romp around our humble solar system."
— Osmo
Advertisement:

Cosmic Osmo is a 1989 Pop Up Video Game created by Rand and Robyn Miller of Cyan, Inc. Like its Spiritual Predecessor The Manhole, where Osmo had a brief cameo, Osmo lets you traipse undirected through a quirky universe packed with Easter Eggs, but this time IN SPACE. There is no ending and no score, and only the mildest of optional puzzles.

The setting is the Osmoian system, home of the quirky, amiable Osmos: aliens with huge feet and round, honkable noses. Your conveyance is a cozy two-room spaceship called the Osmobile, but you can also slip between worlds through a vast network of shortcuts. No matter where you end up, the Osmobile's autopilot will have it waiting for you in orbit.

Despite Osmo's fanbase on the Apple Macintosh, where it remained an exclusive until 2008, it can now be found on Steam

...for Windows users only. Even though the original won't run on today's OS X at all, and despite the developer of the Windows port saying that recompiling her work for OS X would be "trivial".