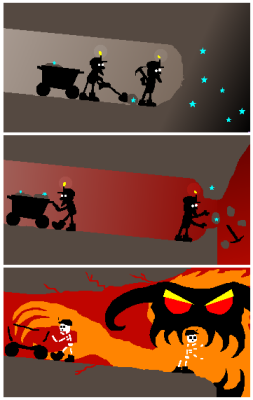 "We dig dig dig and dig dig di- OOOOOOH SHI-"note  This image menaces with spikes of Geoduck.
"Moria! Moria! Wonder of the Northern world. Too deep we delved there, and woke the nameless fear."
— Glóin, The Fellowship of the Ring
Advertisement:

Attempts to exploit a resource (as the name suggests, mines are a popular way this occurs) unwittingly unleash a Sealed Evil in a Can. The Trope Namer is of course The Lord of the Rings, and it seems this happens to dwarves a lot with little variation because Our Dwarves Are All the Same. A mine filled with evil is one of the great traditional Dungeons.

Beneath the Earth is the imagined location of The Underworld and Hell, which in many stories are prisons for the worst monsters in the cosmos. The fear of coming into contact with one of these mythical horrors is likely an inspiration for this.

See also King in the Mountain — accidentally finding him before the country's hour of need can be dangerous. Unwitting Instigator of Doom may overlap this trope.

This typically takes the form of mining through rock and earth, but more exotic variants can also occur — it's not uncommon for drilling through a glacier to unleash a Monster in the Ice, for instance.

Can result in an Abandoned Mine. For cases when man's Pride sends him too far in the other direction, see The Tower. Also contrast Journey to the Sky.

Do not confuse with Digging Yourself Deeper, which is for awkward one-way conversations. Not the result of Digging to China either; that one is a comedy trope. Compare Planetary Core Manipulation.