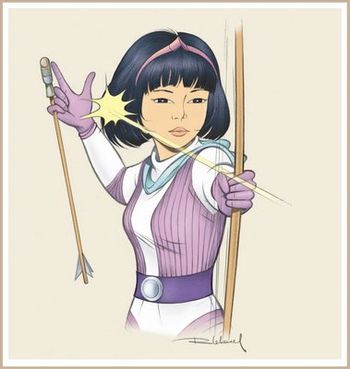 Yoko Tsuno (1970-) is a French-Belgian comic book series by Roger Leloup. The title character is a young Japanese woman of multiple talents, initially trained as an electrician but also skilled in airplane piloting, martial arts (karate, aikido, kyudo), computer programming, etc. She's fluent in many foreign languages: English (required learning in technology fields), French (she's living there...), German (...or close by), Cantonese (her grandmother was from there) and more (most, through sleep learning improved by future technologies). Her adventures usually involve scientific or technological elements, and regularly go into outright Science Fiction, with the recurring presence of a humanoid alien race, the Vineans.

Her sidekicks are two Westerners, Vic Video and Pol Pitron, and she is the adoptive mother of a Chinese girl, Morning Dew.

A novel, L'écume de l'aube (The Foam of the Dawn), tells the story of Yoko's childhood, her family, friends and relationships up to her first adventure outside Japan. The main story arc is about the the Foam of the Dawn, a diamond-colored pearl envisioned by Yoko's grandfather. He tried to create the pearl all his life, but never succeeded and as a result, his cultured pearl business failed and his family was nearly torn apart. Yoko believed in him and convinced him to try one more time.

The books are being translated in English by Cinebook. The first translations were done out of order (e.g. beginning with On the Edge of Life, which was the seventh book in the series), but the more recent ones (starting with The Curious Trio) follow the original order.

The novel L'écume de l'aube (The Foam of the Dawn) contains examples of: