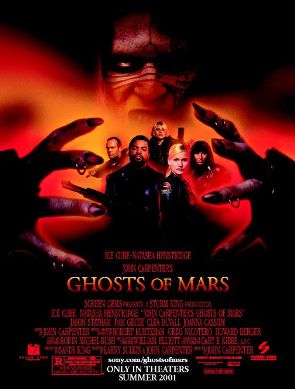 Ghosts of Mars is a 2001 Sci-Fi Action Horror film directed by John Carpenter.

It's 2176 and Mars has been terraformed to have a breathable atmosphere by some matriarchal mining corporation. A crack-squad of Space Police consisting of Melanie Ballard (Natasha Henstridge), Jericho Butler (Jason Statham), Bashira Kincaid (Clea Duvall) and Helena Braddock (Pam Grier) is sent to relocate notorious criminal James "Desolation" Williams (Ice Cube), only to discover that half the colony has been possessed by the spirits of the alien race that used to inhabit Mars which were released via a scientific excavation, causing them to transform into a clan of sadomasochistic self-mutilating punk savages that look as if they're auditioning as extras for The Road Warrior and which murdered the other half. The rest of the movie is spent fighting them off.