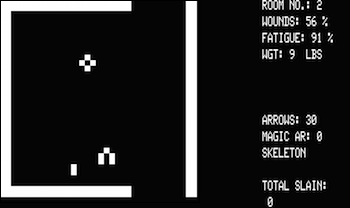 Welcome to Apshai!note  TRS-80 screen shown. The arrowhead is you, the little dot to your left is a treasure chest, and the plus-shaped thing is a skeleton.
"The smooth stonework of the passageway floor shows that advanced methods were used in its creation. A skeleton sprawls on the floor just inside the door, a bony hand, still clutching a rusty dagger, outstretched toward the door to safety. A faint roaring sound can be heard from the far end of the passage."
— Description for Room 1 of Temple of Apshai
Advertisement:

Temple of Apshai is a computer role-playing game released by Epyx in 1979. The game was originally released for the TRS-80 and Commodore PET, but was later ported to the Apple ][, Atari 8-Bit Computers, IBM Personal Computer, VIC-20, and other systems.

The game itself is a straightforward dungeon crawl. First, visit the Innkeeper, roll up a character, then haggle your way through purchasing various weapons and armor. Then the Dunjonmaster takes over; enter one of four dungeons, braving various monsters and traps to retrieve the treasures within. Search for secret passages, keep your health and fatigue up, and try to make it out with your health and wealth intact.

Despite its threadbare Excuse Plot and no-frills presentation, Temple of Apshai became a best-selling title of the golden age of computer games, and was highly praised for translating the tabletop Dungeons & Dragons experience to a personal computer. It is considered one of the first graphical RPGs for home computers, and spawned several sequels and expansions. An Actionized Sequel, Gateway to Apshai, was released in 1983 for the Atari 8-Bit Computers, Commodore 64 and ColecoVision.

The Temple of Apshai games feature the following tropes: