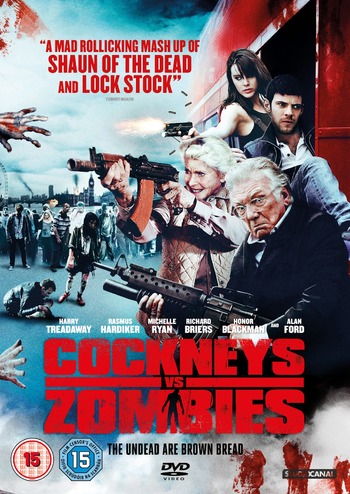 Cockneys vs. Zombies is a zombie comedy in a similar vein as Shaun of the Dead. Directed by Matthias Hoene and written by James Moran and Lucas Roche.

Cockneys vs. Zombies follows brothers Andy and Terry living in the East End of London as they rob a bank to save the retirement home of their foul mouthed war veteran granddad (Alan Ford). Their robbery almost goes belly up with the arrival of the police, but when they open the door they find they’ve been rescued at the last second by the Zombie Apocalypse. Accompanying them throughout the story is the beautiful, innocent hostage Emma, feisty locksmith Katy and the completely insane psycho “Mental” Mickey who lives in a shipping container and has a metal plate in his head. The two brothers make it their mission to get to their granddad and rescue him and the surviving old timers from the zombie hordes before it’s too late.