Video Game / The Lord of the Rings Online 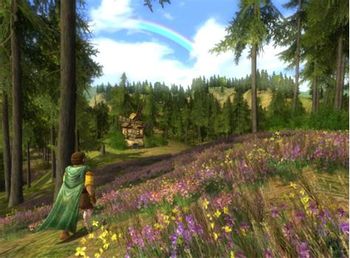 The Lord of the Rings Online (aka LotRO) is yet another MMO on the market. While nowhere near as popular as World of Warcraft, it has a healthy player base that has been growing. Often compared against World of Warcraft (and which MMO isn't, these days) it holds up well enough. Its emphasis is less on PVP and Raiding and more on Roleplaying, Crafting, and Socializing (though PVP and Raid elements are present and Raiding is an important part of the game). With a low emphasis on PVP and a high emphasis on RP and social aspects, LotRO has managed to attract one of the nicer and more mature MMO communities around. Being that both were created by Turbine, it has many features in common with Dungeons & Dragons Online, though the play style differs significantly. Turbine has now moved on, Standing Stone Games now developes LotRO, and several of the original developers are now part of SSG.

Set in Tolkien's Middle-earth, this game is based entirely on the books; as such, it has a rich lore from which to draw quests, locations and scenarios. The game's storyline roughly follows the books; however, while the story follows the movements of the Fellowship, what it really focuses on is what everyone else is doing. As a player, you adventure and aid not only the Fellowship, but also the residents of Middle-earth as they prepare for battle against Sauron.

Aside from some introductory quests, the game's storyline begins in Eriador around the time Frodo Baggins begins his journey, and focuses on combating the rise of Angmar, the long-fallen realm of the Witch-King. In the 12+ years since the game launched, many updates and expansions have introduced additional regions, features, and quests. Each piece of new content takes place later in the timeline of the books. The main Story Arc of the game consists of the mostly-freenote Volume III, Books 11-14 require purchase of the Helm's Deep expansion Epic questline, supplemented by smaller storylines and Sidequests available in each region.

The Mordor expansion pack released in the Autumn of 2017 brought the game's latest storyline to the moment of the One Ring's destruction and beyond, launching a new story titled the Black Book of Mordor, in which the Free Peoples must deal with the remaining threat posed by Sauron's former underlings, starting by entering the Black Land itself. This expansion also introduced High Elves as a playable race. The Black Book was concluded with the release of the Minas Morgul expansion in late 2019, which also introduced Stout-axe dwarves as a playable race.

Beginning life as Middle-earth Online in 1998, the license to develop the game bounced through several developers (including Vivendi Games) before landing with Turbine in 2004. The game launched in 2007, with the smoothest MMO launch in history. The game boasts several semi-unique features, such as the Music system, which allows players to form bands and play music in-game, either by playing manually, or by playing .abc files via in-game commands. The Outfit system also allows for much more character customization than some rivals allow.

An arguably inventive stroke is in the character classes. While basic party roles and jobs are still used, the class that handles that role is usually not the traditional one to do it (though they all do make sense when you think about it.) Many classes have parallels to characters in the book, though certainly not all. A basic class breakdown is as follows in the folder:

The Races are the various Free Peoples of Middle Earth; Elves (and High Elvesnote Elves who saw the Light of the Two Trees of Valinor, and possibly their close descendants), Dwarves (and Stout-axesnote the remnants of a dwarf clan from the East who were enslaved by Sauron), Hobbits, and Men (and Beorningsnote a family of Men who can skin-change into bears). Each Race has their own bonuses and unique traits that can be earned via special "Enmity" Deeds: Elves go after Drakes/Goblins/Orcs, Men hate Undead/Wargs/Hillmen etc. and each Race has their own specific traits to earn: such as bonus axe damage for Dwarves or a unique stealth mechanic for Elves.

It should be noted that LotRO follows the storyline of the books, so it contains most of the tropes from the books as well. The following lists only the tropes that apply to the game itself. For the full list of tropes for the storyline, see The Lord of the Rings.

open/close all folders
Tropes A to B
Tropes C to E
Outside of Monster Play, one type of Skirmish Lieutenant is the Dourhand Storm-keeper, an evil NPC Rune-keeper.
Tropes F to G
Tropes H to I
Tropes J to L
Tropes M to N
Tropes O to R
Tropes S to T
Tropes U to V
Tropes W to Z