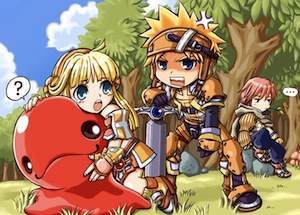 Lunia was an MMORPG developed by the Korean company Allm. It finished development in 2007 and was published in North America by Ijji, in Europe by OGPlanet, in Taiwan by Chinese Gamer, in South Korea by Nexon, and in Brazil by Level Up! Games. Its global release was originally run by CDC Games USA at their 12 foot tall game portal, but 12 foot tall sold the game to Ijji. Lunia mixes elements of Action Games and RPGs together, making it a fun and unique game.

In Lunia, you play as any of the available characters. You can buy new characters or get them through quests in-game. The characters that you can choose from in the beginning if you don't buy any extras are Eir the Healer, Dark Eir the Dark Healer, Dainn the Wizard, Sieg the Knight, Tia the Thief, Gaon the Spearman, and Arta the Engineer. The other characters that you can buy or do quests for are Lime the Combat Slime, Dacy the Puppeteer, Yuki the Snow Girl, Krieg the Paladin, Arien the Archer, Ryan the bounty hunter, Kali the demonic bard, Asuka the Dual Wielding Swordfighter, Ralph the Fighter, Gaon the Spearman, and Iris the flame Witch.

One of the distinguishing features of Lunia is its combo system. You use the arrow keys to move around and the "A", "S" and "Spacebar" keys to attack. "A" is your normal attack, "S" is a special attack unique to your character and "Spacebar" is what you press in front of a monster that is knocked down. You can press them all in different combinations to create powerful attacks. Add in a few skills and you can pretty much solo the game until you reach myth. Then, you should probably get a party.

The game was ultimately shut down in the closing days of 2013.

Tropes that apply to Lunia