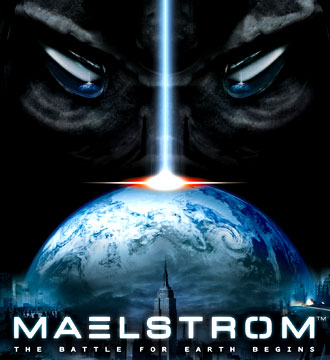 Maelstrom is a Real-Time Strategy game, released in 2007 by KDV Games. It is set on future Earth, where humanity has split into two warring camps: Ascension, made up of the unified corporations of the industrialised world, and Remnants, which are low(er)-tech rebels who resist their tyranny. Their struggle has just reached stalemate when the Alien Invasion occurred. The aquatic Hi-Jenti race has occupied Earth’s oceans, and seeks to spread further inward and eradicate human race by completely flooding the surface.
Advertisement:

. Oh, and it has nothing to do with with the tabletop game of the same name, the water ride at EPCOT Center, the Asteroids clone by Ambrosia Software or the My Hero Academia fanfic of the same name.