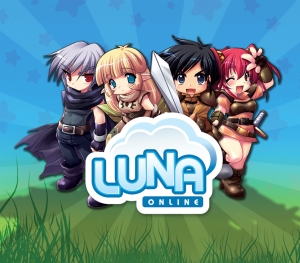 Luna Online / Luna Plus / Celesia Luna is a Korean free-to-play MMORPG created by EYA Interactive, which was then published by Gala-Net Inc in May 2009. Similar to some online dating sites, Luna encourages socializing with a built-in match making system that pairs boys and girls based on their likes and dislikes. These pairs can also enter dungeon dates, which sends the two players into several waves of monsters depending on the level chosen (1-20, 21-40, etc).

Classes
With a surprising amount of classes in total (52) and a max character creation of 5, it is possible to experiment with different class combinations, such as Mage - Cleric - Priest - Warlock class line. All skills learned by cleric and priest class will still be available to the Warlock class. With the creation of families, it is possible to own a plot of land called Farms. Farms can only be purchased and operated by Families (Luna’s term for 5-manned guilds). All these features allow female gamers who enjoy dolling up and male gamers who enjoy challenges to find their niche.

One of the main aspects of the game is the overabundance of available costumes to receive in-game v.i.a item mall

The General plot takes place in a fictional, floating island called Blue Land, in which many creatures inhabit. An unusual disturbance made these creatures very violent, turning them into demons, who waged war on both, Humans and Elves. The Humans and Elves decided to create an alliance to fight off the demons. The player (human, elf) acts as a wandering traveler who enters the crossfire between the forces.

In December 2010, an expansion was announced called Luna Plus, which introduced new enemies, maps, and pets. It also introduced the playable Majin class, which appeared as black demons with the ability to dual wield daggers.

When the expansion was released (January 2011), several unfixed bugs came with it, which remained mostly unchanged for about a year. On March 2012, gPotato closed down the official server of Luna Plus, with no statement as to why, though it can be assumed that the developer neglected it to focus on new projects. After a time, the game was picked up by Suba Games and is currently in Open Beta under the title Luna Online Reborn.

Private servers of both games still exist. The most popular version, Celestia Luna

is in it's alpha stage.

As of 2013, there has been an announcement for a relaunch of the official server for Luna Plus for Korea under a different publisher name.

In 2012, A sequel named Luna Story ELS went into development and on 2015, the ownership of the game development was transferred to Webzken Korea, who have now officially announced the game to be entering closed beta early in Q1. There is no confirmation if the game will be heading overseas.