Visual Novel / Lucy ~The Eternity She Wished For~ 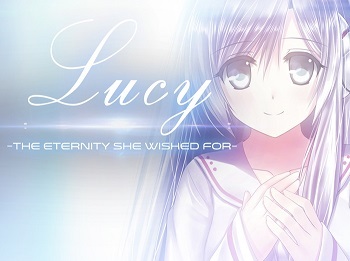 If there was a robot that could laugh, cry and smile...does it have a soul?
Advertisement:

In the near future, androids have become the norm. Emotionless husks of metal have become a part of human society, much to the dismay of the boy. The robot he found at the dump site, though...this one was different. It laughed, it cried, it smiled, it dreamt, just like a human...

Taking place in mid-21st century Korea, Lucy ~The Eternity She Wished For~ is about a high school boy and an android called Lucy. You play as the boy, who faces decisions and moral dilemmas in this near-future world. Through his experience, the audience looks at the role of advancing technology and its effects upon human society. The visual novel raises important questions like what exactly makes us human and what it means to love.

The original version of Lucy ~The Eternity She Wished For~ received high praise in its native South Korea following its original release in 2010. This prompted a successful Kickstarter project which funded a remake of the visual novel, including its localization to English and Japanese with an added Japanese voice acting feature. The game is currently available on Steam.