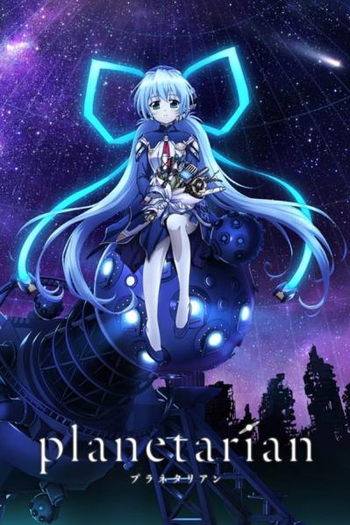 "Why don't you come to the planetarium?
The beautiful twinkling of eternity that will never fade, no matter what...
All the stars in the sky are waiting for you."
Advertisement:

Planetarian (full title Planetarian ~chiisana hoshi no yume~, meaning "the reverie of a little planet") is a Kinetic Novel (a type of Visual Novel with only one path) made by Key/Visual Arts. Like CLANNAD it is completely "clean", with no adult content.

In a dystopian future where most of humanity is dead and acid rain falls constantly, a Junker — someone who goes into ruined cities to scavenge for useful things — takes shelter overnight in an abandoned planetarium.

... Well, a nearly abandoned planetarium, that is. There's still one staff member left: a robot girl named Yumemi Hoshino (Reverie Planetarian in the Fan Translation). She seems not to realize what has happened, behaving as though she's still living in the era before the war which caused all the destruction, and is still waiting for the return of her human co-workers, who were evacuated long ago. She enlists the Junker's aid in fixing the planetarium's broken projector; over the course of the repair project, he grows fond of her, and begins trying to convince her to leave the planetarium and come with him.

The visual novel spawned a light novel that contained stories set in the same world, which was eventually turned into three separate drama CDs: Snow Globe, which serves as Yumemi's backstory; Jerusalem, which provides some insight on the war that's leading the world to ruin; and Hoshi no Hito, a tale that serves as a Distant Finale to the events of the visual novel.

and on Steam, also with an English translation.

An animated adaptation done by David Production was announced on April 1st, 2016, and began to air July 7, 2016 as part of the Summer 2016 Anime lineup. A companion film, which adapts Hoshi no Hito, premiered on September 3, 2016. Funimation has picked up streaming rights for the anime and released a broadcast dub on August 4, 2016.