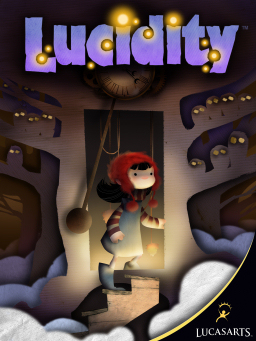 Lucidity is a Puzzle Platformer by LucasArts, released in 2009 for PC and Xbox 360.

It stars a little girl named Sofi who traverses her dreams and is not directly controlled by the player. Instead, she continually walks forward and it’s the player’s job to guide her safely to the end of each level by use of randomly generated objects, such as a staircase to connect platforms and a spring to jump to otherwise out-of-reach areas.