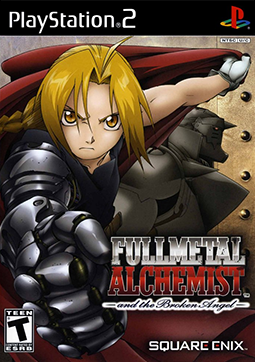 Fullmetal Alchemist and the Broken Angel is an 2003 action role-playing game developed by Racjin and published by Square Enix for the PlayStation 2 console and is the first ever Fullmetal Alchemist video game released. The story penned by Hiromu Arakawa takes place between episodes 17 and 18 of the 2003 anime, when Edward and Alphonse are on their way to Central City after their return from Resembool. However, their train gets derailed by a terrorist group, forcing the brothers to reach their destination on foot. While on their way, they are attacked by chimeras and meet a girl named Armony, who leads them to the town of New Heissgart. Her father turns out to be Professor Wilhelm Eiselstein, an old friend to Ed and Al, and one of the greatest Alchemists in the world with knowledge on catalysts (the study that makes alchemy even more efficient) and researching an artifact known as the Philosopher's Catalyst, which has powers equaling that of the Philosopher's Stone. This Philosopher's Catalyst seems to be directly linked with all the alchemists and military men gathering on the city as well as the berserk chimeras rampaging across the countryside. The Elrics soon stumble into a sinister plot even darker than expected with the good professor at the center of it.

The gameplay is a 3D beat-em-up type where players are in control of Edward and the combat revolves around the use of alchemy. Using a special button, they can transform a variety of objects into weapons, blades, items and other objects as well as equip them with numerous enhancers. It has a role-playing mechanic, allowing players to level up by defeating enemies and earning experience.

Fullmetal Alchemist and the Broken Angel contains examples of the following tropes: