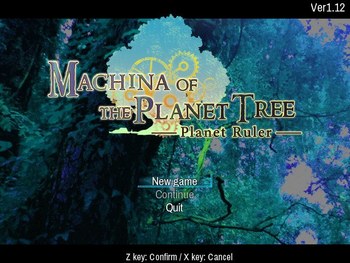 Machina of the Planet Tree -Planet Ruler- is a RPG Maker VX Ace game developed by Denneko Yuugi in 2013 and translated to English by Sekai Project in 2015.
Advertisement:

The "Old World" was once an advanced civilization that utilized ether from the Planet Tree, Esthanatelle, but it eventually destroyed itself with nothing but "Attribute" relics remaining. Afterwards, the Esthanatelle Order, a religion centered around the Planet Tree, became the main political power of the world and established the Halbern Machinery Academy to research Attributes. The main character, Cram Lanvelouche, is an ace student of the academy who is tasked with investigating Ruin #7. Near the end of the dungeon, he meets a trespasser, Retla, who teams up with him in later dungeons. The two eventually discover Estiole, a mysterious girl who was sealed in the Planet Tree itself. Unfortunately, the trio ends up getting involved in the secrets of the Old World, which threaten the safety of the current one.

"Attributes" being mainly consumable items, in the context of the game.

This game also has a Unity Spin-Off, Machina of the Planet Tree -Unity Unions-.