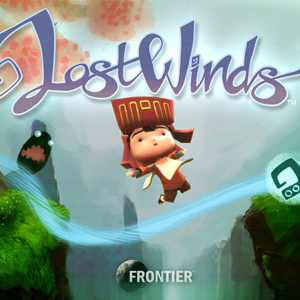 From left to right, a Glorb, Toku, and Enril.
Advertisement:

LostWinds is a unique WiiWare Platform Game developed and published by Frontier Developments and released in 2008. One day, while out playing, a young boy named Toku finds a strange blue stone. Inside the stone is Enril, a wind spirit from a forgotten age. She needs his help — long ago, she helped to seal the evil spirit Balasar, trapping herself along with him, but now Balasar is on the verge of breaking free. Enril, however, is still confined to the stone; she can only go where the stone, and, by extension, Toku, goes. Controlling Toku with the Nunchuck and Enril with the Wii Remote, you must use your wind-based powers to jump, glide, and explore the world and find out how to stop the ultimate evil from breaking free once more.

The 2009 sequel, LostWinds 2: Winter of the Melodias, begins with a new character, Riveren. After being late for his duties regarding the Melodias King's homecoming event, he stumbles onto a black stone containing Balasar's spirit. Incidentally, this sounds rather familiar. The rest of the game shifts back to Toku as he and Enril attempt to discover and break the curse befalling the Melodia City and also affecting his mother, Magdi. This game features the ability to change the seasons with the spirit Sonte, adding a new dimension to solving the various environmental puzzles.

It remains to be seen where Toku and Enril will blow off to next, though given that the story is far from complete, we're sure to find out sooner or later. Both games were eventually released on Steam.