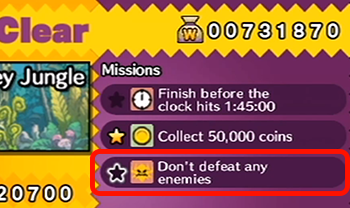 The things you gotta do for 100% Completion...
"Normally I wouldn't ask you to hold your fire — but one of the Vek is a Volatile, it'll explode if you kill it. Drive it off instead."
— CEO Kern, Into the Breach
Advertisement:

A frequent Drama-Preserving Handicap, this trope is in play whenever a character has to undergo the task of beating, outwitting, or capturing another character without causing them excessive harm, provided causing ANY harm is even an option.

Picture this scenario. Let's say that Carl has assigned Bob and Alice the task of capturing an experimental beast that has escaped from the facility. No problem, right? The two are a bonafide Action Duo capable of taking down massive troops of goons on their own. How hard can taking down and reclaiming one beast be? Well there's just one thing. Carl says that the monster cost the facility so much money that losing it would set the program back immensely. Thus two must retrieve it alive and unharmed. Oh boy howdy....

There are many ways this can be brought about. Perhaps a character must subdue a beast without hurting it as per requirement of a Hidden Purpose Test or the like. Perhaps a character finds out that a monstrosity is actually a loved one and they must find a way to restore them without killing them. Another case may be having a Badass Pacifist feel the need to set an example for others who feel that only force can get anything done.

Other conditions that can bring this about include:

As you can expect, this trope is the ire of any Blood Knight (unless they're a Consummate Professional). After all, fighting is supposed to be a thrilling activity where one can cut loose and show how just how badass they are. Why does one have to restrain themselves against an enemy that's free to kill them if they wish? The Psycho for Hire also tends to get put on the spot a lot when it comes to this. Sure he may have the skill set, finesse, (and often Lack of Empathy), for easily dispatching of targets, but if he suddenly gets a request from a client to not kill, then it'll become one heck of a struggle for them to hold themselves back.

Of course just how hard this actually proves to be depends on the fighters' abilities and just what the target is. And a key thing to note overall is that the character doesn't have to be required by another to not inflict excessive harm. A self-applied No Harm Requirement is as much a case as one dealt by another character.

That said, things can definitely go wrong when trying to invoke this trope. If an attempt to adhere to this trope goes horribly wrong, you have Pacifism Backfire. And if the one restricting themselves gets killed, you have Suicidal Pacifism.

This trope tends to be invoked by warrior archetypes that are more averse to violence, which include the Actual Pacifist, Badass Pacifist, Technical Pacifist, Martial Pacifist, and Reluctant Warrior.

Archetypes that tend to have this forced upon them to their dismay include the Blood Knight, Psycho for Hire, Sociopathic Hero, Unscrupulous Hero, Token Evil Teammate, the Ax-Crazy, and Bad Powers, Good People.

Compare/Contrast Escort Mission where one is assigned the task of escorting a character safely and Thou Shall Not Kill which is a whole philosophy around not killing. (Although non lethal violence tends to be permissible.) Also compare Hero Must Survive, a video game trope where the player must keep the hero alive lest they want a Game Over, and the even more extreme No-Damage Run where the player can't take any damage at all.

In video games, if the player invokes this on themselves as a Self-Imposed Challenge, you have a Pacifist Run.

A funny tactic sometimes used to get around this is Stop Hitting Yourself where the character keeps their hands clean by getting the target to pound themselves. Defeat by Modesty, Paralysis, Forced Sleep, and Mind Control are other common means of pulling this off.

Super-Trope to Bring It Back Alive which concerns retrieving a beast or some other thing alive, I Want Them Alive! which is an often villainous variation where the villain demands that the heroes or some other party be brought back alive, Can't Kill You, Still Need You where a character really wants to kill another but can't out of a need to keep them alive, and Sheathe Your Sword where this is actually the only way to win.

Contrast Violence Really Is the Answer