No Place for a Warrior 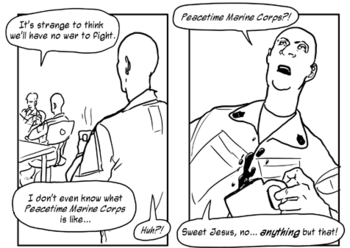 "Join the Army," They Said. Never said nothing about what you do after you leave...
"I fought for humanity! We lost millions in the Xindi and Romulan Wars. And for what? For the Federation to sit me in the captain's chair and break bread with the enemy?"
— Captain Balthazar Edison, Star Trek Beyond
Advertisement:

War Is Hell, so logically peace ought to be better.

Not in this case. For the professional soldier or sailor, peace means they're suddenly out of a job and have to find their way in a world that may have changed dramatically while they were away fighting. They may lack salable skills (that is, ones other than fighting) and struggle to keep food on the table.note Although in the US, veteran households actually make significantly more money than non-veteran ones

. This effect is especially noticeable in black and Latino veterans, which are relatively impoverished ethnic groups overall, making the effect even more prominent in reducing poverty. They may also be dealing with the aftereffects of their war experiences. Perhaps they will go looking for another war and become mercenaries or get involved in extremist politics. Or they will find a hardscrabble job or end up as beggars. They're likely to be found in the Legion of Lost Souls. Naturally they may be a Shell-Shocked Veteran. On the flip side, the civilians may find that the loved ones who come back from the war are not the same people as the ones who left.

One Internal Subtrope of this common in Wooden Ships and Iron Men works (and many Space Opera series inspired by them) is for officers serving in peacetime to be put in reserve on half-pay. This was Truth in Television for navies during the Age of Sail, the British Royal Navy being most often cited, and it tended to mean near-poverty for those without other sources of funds.

Closely related to Stranger in a Familiar Land and The War Just Before. Subtrope of No Place for Me There. Compare And Then What?, Born in the Wrong Century, Outdated Hero vs. Improved Society, So What Do We Do Now?, Victory Is Boring, Won the War, Lost the Peace, Prefers Rocks to Pillows, Former Regime Personnel, and of course Glory Days. Can lead to a soldier going From Camouflage to Criminal. May be experienced by the Returning War Vet or Colonel Kilgore. Compare Oppressed Minority Veteran, when the veteran is mistreated because of their identity status.