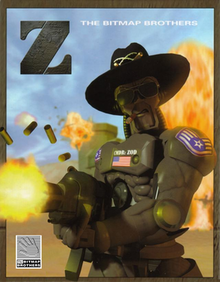 Z (pronounced Zed) is a 1996 Real-Time Strategy game by Bitmap Brothers set in a galaxy far far away where a perpetual war is taking place between two different Interplanetary Empires of sentient biped Robots; the heroic red MegaCom Corporation and the dastardy blue TransGlobal Empires. We follow the story of Commander Zod and his two transport pilots Brad and Allan as they travel across 20 levels on five different worlds; blowing things up, knocking back rocket fuel and taking down names.

A Windows 95 version named Z95 was released soon after, to make the game more compatible with new operating systems. It also included 15 additional levels and some gameplay balance tweaks.

In 2001 a sequel was made; Z: Steel Soldiers which followed the story of Zod (now a lowly Captain) being in charge of one side of a neutral zone on a distant planet. Currently the two forces are under a ceasefire and the possibility for a more permanent peace is also certain. Zod however enters the neutral zone after his men having shot down an aircraft, on it he finds a new secret weapon and uncovers a massive plot of the blues to wipe out major strategic red bases all at once during the peace talks.

An open source Fan Remake of the original game, called The Zod Engine, is also available.

In no way related to the 1969 French political film Z, but it's a easy mistake to make.