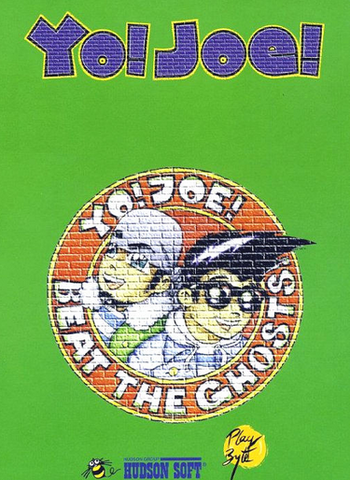 Graffiti artists live a hard life. Joe and Nat are always on the run, trying to escape New York's police. When they reach a mysterious castle, there's no way of knowing they're in deep trouble already.
Advertisement:

Yo! Joe! Beat the Ghosts is a 1993 Platform Game for DOS and Amiga, which features two characters. The protagonists can jump, crawl, kick, beat, slide, and swim. They are even able to hold their breath when under water. If you are playing the game solely, "Joe" is your character of choice. A friend can take on Nat's part at the same PC.

The game's purpose is to get rid of "Professor X", who is the bad guy. The players can attack opponents using several weapons, including molotovs, chainsaws and nunchakus. Yo! Joe! Beat the Ghosts doesn't offer save games. The copy protection requires the original disk at every start-up.

Yo! Joe! Beat the Ghosts provides examples of: