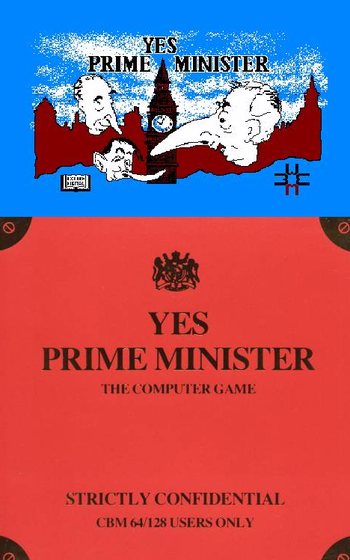 Yes, Prime Minister is a Simulation Game and Interactive Fiction game with graphics that was released in 1987 for Commodore 64, Amstrad CPC, ZX Spectrum and BBC Micro, and ported to DOS systems in 1988.
Advertisement:

Much like most political simulations, you must balance your popularity with the needs of your party, the meddling of foreign governments, and the small minded incompetence of the civil servants that surround you. All of this is played out with multiple choice dialogues between Hacker and the other cast members of the series (complete with lo-res digital pictures). The dry humor of the show abounds as you must deal with crises such as the French refusing to continue work on the channel tunnel until Waterloo station is renamed. Fans of the show will recognize much of the material and non-fans should still find enough laughs to keep them interested.