Distracted by the Luxury 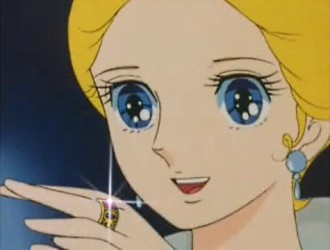 The stereotype of women really liking expensive luxuries, to the point where supposedly they can forget any problems, or do any favors, as long as they get some pretty things to admire. Can be true for some, but not all.

The most common luxury is jewelry, followed by fur coats, fancy dresses (don't need to be pimped out), and then other various things. Whatever the luxury, this trope is using it as a way to try to distract or please the lady, or to try to get her to give you something in return.

In some horror stories, the luxury will be cursed somehow, and may even overlap with Death by Materialism.

Often subverted where a rich guy tries to buy his wife/girlfriend these to distract her from a problem, but it clearly doesn't work. Another variation is a situation where he buys her something luxurious just to be nice, and she assumes he's trying to buy his way out of trouble.

A Gold Digger will actively seek out this trope.

The closest male equivalent is likely Distracted by the Sexy (should be noted one of the uses for this trope is getting the woman to grant sexual favors). Compare Retail Therapy and Ms. Red Ink. Usually not connected to Attention Deficit... Ooh, Shiny!.

Alternative Title(s): Chill Her Out With Ice