Literature / From the Mixed-Up Files of Mrs. Basil E. Frankweiler 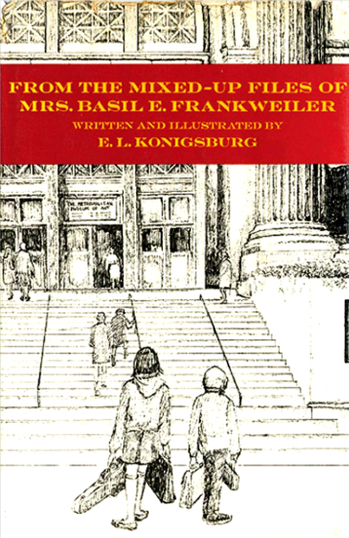 From the Mixed-up Files of Mrs. Basil E. Frankweiler is a 1968 novel by the children's author E. L. Konigsburg, who won her first Newbery Medal for it.

Feeling underappreciated by her parents and the world in general, twelve-year-old Claudia Kincaid decides that the best way to teach them a lesson is to run away from home for a while. But the only thing Claudia hates more than being underappreciated is being uncomfortable, so she chooses to run away to the Metropolitan Museum of Art in New York City (for all those poofy Marie Antoinette beds to sleep in), dragging along her nine-year-old Card Sharp brother Jamie, whose impressive life savings of $24.43note the equivalent of $185 in 2021 ensures that they can afford to hide out in style.

Thus begins the adventure of a lifetime for both of them. Between hiding from museum security in the bathroom in the mornings, tagging along with tour groups all day, and bathing in the museum fountain by night, Claudia becomes obsessed with a mysterious marble angel, sold to the museum for a mere $225, that may or may not be a lost Michelangelo.

And why is eccentric multi-millionaire Mrs. Basil E. Frankweiler writing such a long letter to her dear lawyer Saxonberg?