Manga / Reincarnated As The Strongest Wand 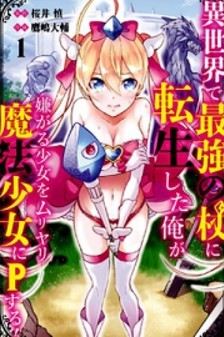 Hmm, maybe I should have chosen an outfit a bit more similar to Luluna...
Advertisement:

One day, Nimii Reiji is attending a movie of his favorite Magical Girl Luluna with his co-worker and co-worker's daughter, when coming out of the theater, the little girl's toy wand stops working as they're crossing the street. A truck runs the red-light. Reiji manages to save the little girl, at the cost of his own life, reduced to Ludicrous Gibs from the impact. When he regains consciousness, he finds himself being summoned to an alternate world, as a wand. The summoner, after giving him an "explanation" that is no explanation at all, leaves him on a shelf, unattended, and is never seen again. Soon after, a village girl, Walpurga, arrives seeking aid to deal with an attacking monster. She stumbles upon him, just as said monster smashes through the walls of the cabin they're both in. Having no clue what he's doing, Reiji gives her the only "magic" he knows, and turns her into a magical girl. Hilarity Ensues. Thus begins their life in this new world...

Compare and contrast with Reincarnated as a Sword which involves a Japanese Salaryman being reincarnated into a weapon and winding up in the hands of a teenage-girl.