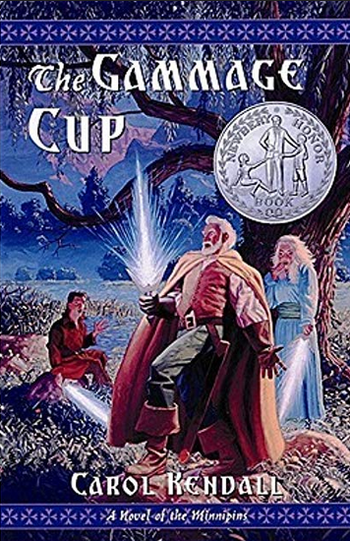 In the peaceful land of the small folk, the Minnipins, everything is exactly as it has been for hundreds of years. Everyone is going about their jobs, the Periods (descendants of Fooley the Wise) are in charge, and the Watercress River is flowing. Everything, except... The legendary Gammage Cup is finally going to be moved! Each of the Minnipin towns wants, above all else, to be chosen as the most worthy, the town to hold the Cup.

Oh, and the Minnipins' ancient enemies are mining their way in, too. The evil Mushrooms seek gold, and probably also the destruction of all Minnipins For the Evulz. To make matters worse, everyone is too focused on winning the Gammage Cup to pay any attention to a few fires on the mountaintops.

Well, everyone except oh, them. Gummy, Curley Green, and Walter the Earl are paying attention, but only two others believe them — Muggles and Mingy. Ultimately, they are exiled from their village for their attempts to sabotage their town's chances of winning the Gammage Cup.

They promptly set up a life in the wilderness, off of the Little Trickle stream. Everything goes great, until the Mushrooms actually arrive...

Was adapted as a part of the CBS Storybreak, though it should be noted that the special takes a number of liberties with the story. Can be found here

. The sequel is titled The Whisper of Glocken, and the distant prequel The Firelings.

Tropes contained in The Gammage Cup: