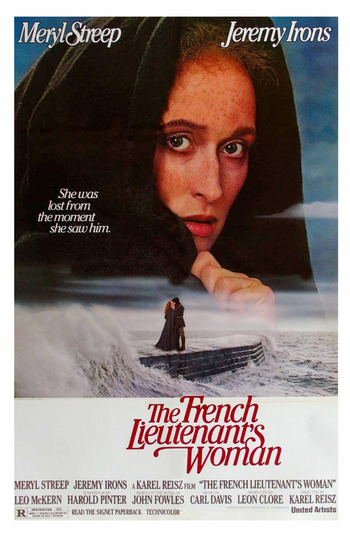 A pastiche of Victorian novels, The French Lieutenant's Woman sets up the familiar archetypes and dilemmas found in such books and set about quietly subverting them with a cavalcade of Lampshade Hangings, Shout Outs and fourth-wall breakings. Writing itself is one of the major subjects of the book, and the seemingly omniscient narrator/author's struggle to accurately convey his story are as much a concern of the book as the tribulations of the characters.

The year is 1867, and gentleman Charles Henry Smithson is fairly content with life. He is engaged to Ernestina Freeman, an industrialist's daughter who is kind, loving and rich. Within a few years he can look forward to inheriting his family's estate from his uncle. Although he has no great achievements to which to aspire, he has an agile mind and a passion for natural sciences. However, a lingering dissatisfaction with the predictability and restraint of the society around him gnaws at Charles, and this becomes increasingly hard to ignore after he meets Sarah Woodruff, a single governess variously nicknamed "Tragedy" and "the French lieutenant's woman".

Initially telling himself he is only curious, Charles is increasingly attracted to this strange, passionate woman, and finds himself at odds with the propriety that Victorian England so prizes.

Adapted as a 1981 film directed by Karel Reisz, scripted by Harold Pinter and starring Meryl Streep and Jeremy Irons.