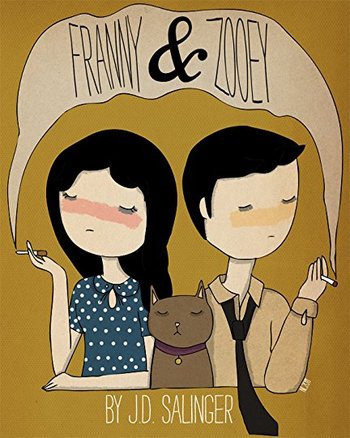 Franny and Zooey comprises a short story and a novella by J. D. Salinger, published together as a book in 1961; the short story and the novella originally appeared in The New Yorker in 1955 and 1957, respectively. The short story "Franny" serves as a prologue to the events of "Zooey".

Though nowhere near as popular or influential as The Catcher in the Rye, Franny and Zooey has a cult following. It has been widely suggested that The Royal Tenenbaums is a loose, unofficial adaptation of this book, due to the fact that both contain a dysfunctional, gifted family, one of which is voluntarily locked in a bathroom.

In case you're wondering, yes, Zooey Deschanel is named after the "Zooey" character, despite the latter actually being male.