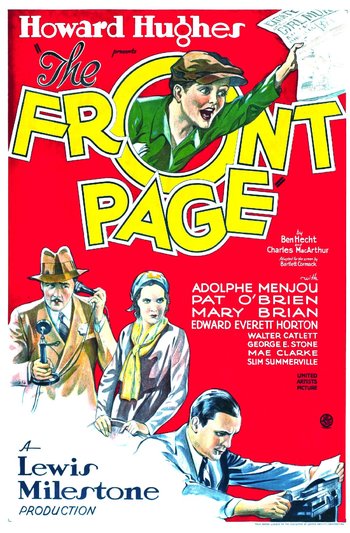 The Front Page is a 1931 film directed by Lewis Milestone, starring Adolphe Menjou, Pat O'Brien, and Mae Clarke. It was produced by Howard Hughes.

Hildy Johnson (O'Brien) is an investigative reporter for The Morning Post. He is engaged to be married, and is quitting the newspaper business to work for his fiancée Peggy's family's advertising business. Hildy drops by the press room by the prison to say goodbye to all of his fellow reporters on the crime beat. The reporters are all at the prison because of the impending execution of one Earl Williams, a mentally addled anarchist who shot a cop. All of the reporters think that the cynical mayor is greasing the skids for Williams' execution in order to get re-elected—the election is in two days.

Enter into this Hildy's editor, Walter Burns (Menjou). Walter serves his newspaper with a monomaniacal devotion, and is determined to save Earl Williams, not because he cares about Earl Williams (he doesn't really), but to embarrass the mayor and his toady, Sheriff "Pinky" Hartman. He also wants the story for his newspaper and he wants Hildy to write it. Walter, who does not want his best reporter to quit, sets about to undermine Hildy's relationship with Peggy. The situation grows more chaotic when Earl Williams escapes from prison.

The Front Page was the first of several screen adaptations of the hit 1928 stage play of the same name (written by former real-life Chicago reporters Ben Hecht and Charles MacArthur). It was remade in 1974 by Billy Wilder, and again in 1988 as Switching Channels, which updated the setting to the cable TV news era. However, the most famous remake was Howard Hawks' 1940 film His Girl Friday. That version, while being very faithful to the story of the play and the 1931 film, pulled a Gender Flip in which "Hildy Johnson" became a woman (played by Rosalind Russell) and her editor Walter Burns (played by Cary Grant) became her ex-husband as well as her boss.