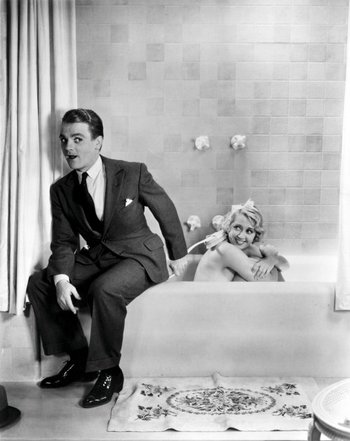 Small-time hustler and part-time bellboy, Bert Harris (James Cagney), dreams of hitting the big leagues of con artistry, even going as far as having a scrapbook of great cons. Anne Roberts (Joan Blondell) is the girl he sets his eyes on, and he gets her a job as a chambermaid. But she’s a smart, tough girl who never takes any of his crap, telling him where he can go with a continual array of slaps. Eventually, and somewhat begrudgingly on Anne’s part, they team up to fleece former patrons of their Midwestern hotel, and later make a living from conning other lawbreakers.

Bad circumstances come along—Bert’s plans screwing him over rather than winning big— so Bert decides to team up with another couple, Dapper Dan (Louis Calhern) and Helen (Noel Francis), who also love to scam. Finding himself constantly rejected by the reasonable Anne, Bert falls into the arms of Helen, making Anne jealous and suspicious of their relationship.

Things escalate when Dan tells him of a great little scheme: buying counterfeit bills with their scam money and doubling it. Without a second thought, Bert latches on to it, but Anne has her reservations. Foolhardily, he steals Anne’s money, loses it since Dapper and Helen were using him all along, and Bert sinks to an all-time low: he steals from innocent people to get Anne's money back.

Meanwhile, a chance meeting on a train has Anne falling for stock trader, Joe Reynolds (an early film appearance of Ray Milland). Not so shockingly, Joe is a conman, but one who wears nicer suits; he’s embezzled thousands, and while pretending to need Bert for a favor, he manages to let the blame fall on unsuspecting Bert.

Directed by Roy del Ruth, Blonde Crazy a.k.a. Larceny Lane (1931) is the fourth Cagney and Blondell starring vehicle, and their chemistry sizzles up the screen.