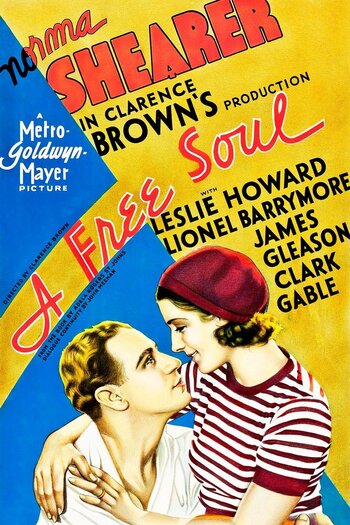 Barrymore is Stephen Ashe, a highly skilled criminal defense attorney as well as an alcoholic. Both of these make him the Black Sheep of the old-money, very snobby Ashe family, along with his affectionate daughter Jan (Shearer). Jan is a free spirit (hence the title) who is reluctant to settle down with her pleasant but terminally bland suitor, Dwight Winthrop (Howard).

Instead she is drawn to Ace Wilfong (Gable), a local crime boss for whom Stephen just won an acquittal for murder. She spends the night with Ace, who instantly starts to grow possessive and controlling. Meanwhile, Stephen is aghast at his daughter's relationship with a criminal, so Jan offers him a deal: she'll quit Ace if he quits drinking.

A Free Soul won Barrymore the Academy Award for Best Actor. It was also a Star-Making Role for Gable (here billed fifth), catapulting him to leading man status, which he would retain for the rest of his career. This is Early Installment Weirdness for Gable, sort of, in that he's the villain, but the interesting thing is that this is only a minor tweak on the aggressively manly characters he'd play as a hero.