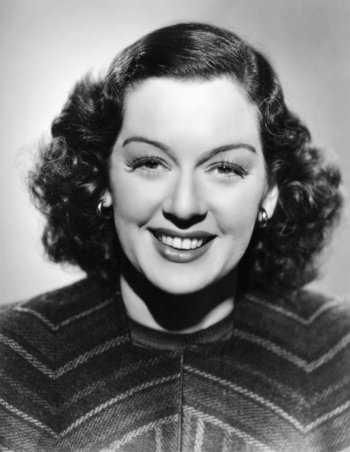 Catherine Rosalind Russell (June 4, 1907 – November 28, 1976) was one of the most prominent leading ladies of The Golden Age of Hollywood. Tall and beautiful, she was often cast as incarnations of fashion and high class. She had a broad range but particularly excelled at screwball comedies and musicals.

Russell was born in Waterbury, CT. She went to the American Academy for Dramatic Arts in New York and embarked on a show business career immediately after graduation. After an unsuccessful stint at Universal she signed at MGM and started getting supporting roles, often as Fake Brits for some reason. A starring role in domestic drama Craig's Wife helped Russell rise to the A-list.

In 1939 she played in Ensemble Cast piece The Women as the bitchy friend of Joan Crawford's husband-stealing vixen. Probably the highlight of Russell's career came in 1940 when she starred opposite Cary Grant in His Girl Friday. His Girl Friday was an adaptation of stage play The Front Page which had already been made as a film in 1931 as The Front Page. The 1940 version did a Gender Flip, casting Russell in the part of Intrepid Reporter Hildy Johnson that had been played by Pat O'Brien in 1931, and making her boss (Grant) her ex-husband as well. It was a huge success.