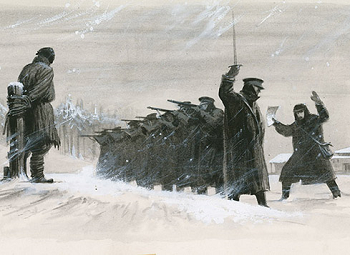 Last-Minute Reprieve is a situation in which our brave hero is facing death on the gallows. Suddenly, a messenger or Courier gallops in to inform everyone he's been pardoned Just in Time.

Now a Discredited Trope that is subverted more often than not. Sub-Trope of The Pardon. Compare Acquitted Too Late. See also The Cavalry for other occasions when someone shows up to save our heroes in the nick of time.