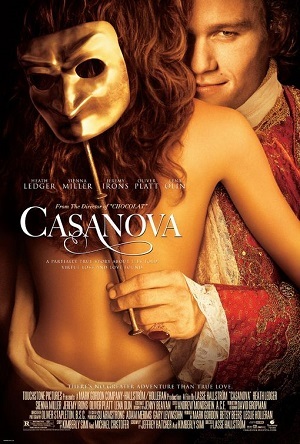 It's the year 1753. Giacomo Casanova is waiting for a promise made by his mother several years ago. Meanwhile, he spends big time in Venice as an infamous lover and seducer for several ladies, something that the Church has not tolerated for a long time. When Casanova is finally apprehended, his friend and protector the Doge has had enough of his cheekiness and gives him one chance for redemption by finding a decent woman and marry. He finds a good chance with Victoria—the "pure" daughter of Mr. Donato—who actually lusts for him every time.

Casanova ends up meeting a beautiful, ahead-of-her-time woman named Francesca Bruni, who despises what he's doing. She also is inconveniently engaged to a butter merchant from Genova she's never met, Paprizzio. Both defiant and betrothed, Casanova begins to slowly fall in love with her.

Also, her clumsy brother Giovanni is jealous of him for conquering the heart of Victoria, with whom he has been in love for some time. Casanova unwillingly must impersonate several people, including Paprizzio and Guardi, and use the picaresque in order to get closer to Francesca. Also, the Church has sent a cruel inquisitor to Venice to stop Casanova's schemes. Hilarity Ensues.

Casanova is another approximation of the Casanova myth, this time in a rom-com style with Heath Ledger playing the titular character and directed in 2005 by Lasse Hallström. It also stars Sienna Miller as Francesca, Natalie Dormer as Victoria, Charlie Cox as Giovanni, Oliver Platt as Paprizzio, Lena Olin as Ms. Bruni, Jeremy Irons as inquisitor Pucci.