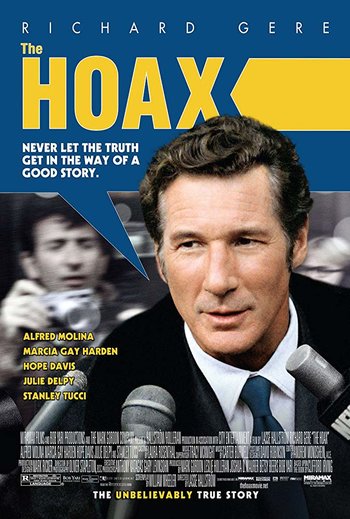 The Hoax is a 2006 American drama film directed by Lasse Hallström starring Richard Gere, Alfred Molina and Marcia Gay Harden loosely based on the true story of Clifford Irving and his fake autobiography of Howard Hughes.

Clifford Irving (Gere) is a struggling writer whose latest book (which he believes will finally propel him into the big time) was rejected by his publisher. Angered at the rejection and their subsequent indifference, Irving claims he is working on "the book of the century" and that they will heavily regret it if they reject him again. While brainstorming with his friend and fellow author Richard Suskind (Molina), he has the idea of claiming that he was hired by Howard Hughes himself to write his autobiography. Since by this point Hughes was well into his reclusive phase and leery of legal action, Irving believes he is comitting The Perfect Crime. However, the public isn't easy to fool, prompting an elaborate con on the part of Irving, his wife Edith (Hayden) and Suskind to track down everything that can be used to make the book look authentic, such as signatures, documents, etc.

...of course, this would all come crashing down if Hughes himself suddenly came out of seclusion to deny ever dealing with Irving but what are the odds of that happening?