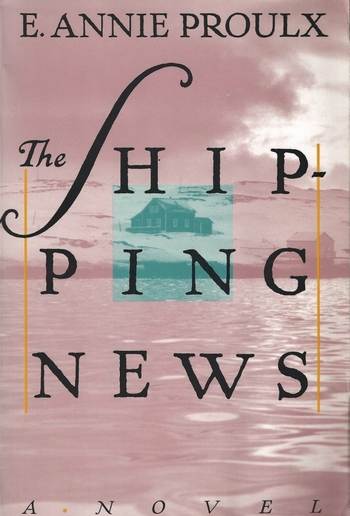 The Shipping News is a Pulitzer Prize-winning 1993 novel by Annie Proulx.

It centers around Quoyle, a newspaper reporter whose life is unraveling. His parents kill themselves after they are both diagnosed with cancer. His monstrous sociopath of a wife, Petal, attempts to sell their two daughters to sex traffickers. Petal leaves Quoyle, only to be killed in a car wreck. All these shocks lead Quoyle to take his daughters to his father's home town, the village of Killick-Claw in Newfoundland. There he attempts to start a new life. He gets a job at the local newspaper and finds love with Wavey, a woman in the town.

In 2001 it was made into a feature film directed by Lasse Hallström, starring Kevin Spacey as Quoyle, Judi Dench as Agnis, Cate Blanchett as Petal, and Julianne Moore as Wavey.