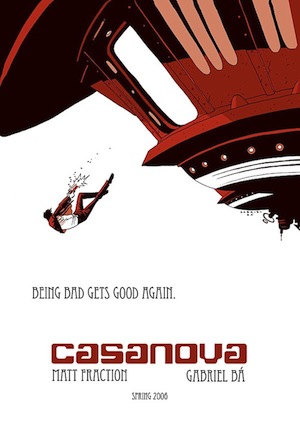 Cooler than Thou
Advertisement:

Casanova is a comic book series that debuted in June 2006 written by Matt Fraction with art by (so far) Gabriel Ba and his brother Fabio Moon. Inspired by Jerry Cornelius, Danger: Diabolik, Nick Fury: Agent of SHIELD and, of course, James Bond, it tells a trippy tale of spies, flying cars, crazy gadgets, bizarre psychic powers and mind-upgrading drugs. Each story arc is named after one of the Seven Deadly Sins. As of June 2021, Luxuria, Gula and Avarita are complete with the current arc titled Acedia.

Allow us to rephrase.

Casanova Quinn is, among other things, The Most Interesting Man in the World.

And that's just the first issue!

These tropes feature in his life:

Psychic combat at dawn ... because The Genre Demands It!