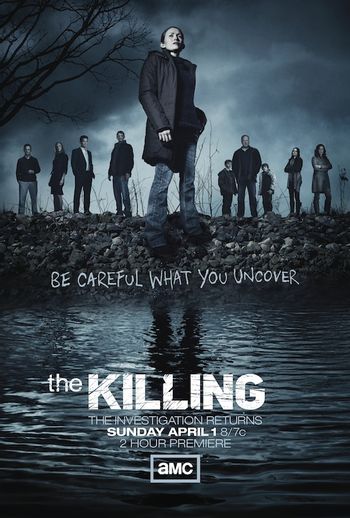 The Danish original is under Forbrydelsen. If your moody sweater-wearing detective has brown hair, follow the link.
Advertisement:

The Killing is an American crime drama airing on AMC based on the Danish series Forbrydelsen (literally translates The Crime but marketed to English-speaking territories as The Killing). Each arc focuses on one crime with each episode devoted to one day in the investigation. Set in Seattle, Washington, the first arc (broken into two half-seasons) focuses on the murder of Rosie Larsen, from three different perspectives:

Detective Sarah Linden was about to move to San Francisco, but the grisly crime persuades her to stick around and solve it herself, accompanied by her would-be replacement, Stephen Holder.

Rosie's parents, Stanley and Mitch, try to move on with their lives to the best of their ability, but it's far easier said than done.

Mayoral candidate Darren Richmond makes the case an important part of his campaign, declaring that this kind of crime will not happen on his watch. But along with the tactic comes struggles with his conscience over exploiting the tragedy.

The Killing provides examples of the following tropes: