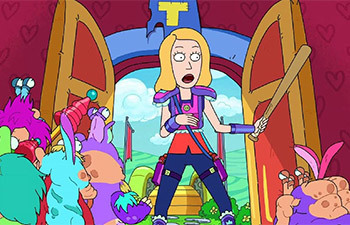 "A dad makes a toilet look like R2-D2, and it breaks the front page of Reddit, but I'm Charles Manson because I gave you your own world instead of an iPad. "
— Rick Sanchez
Advertisement:

Beth learns that her childhood friend Tommy is not dead, as everyone believes, but trapped in a parallel world that Rick created for her when she was younger. As they search for him, they find out that he's become a depraved and twisted individual, and we learn of Beth's hidden dark side.

Meanwhile, Morty and Summer are introduced to Jerry's new alien girlfriend Keara. The relationship doesn't work out, but Jerry's attempt at breaking up with her leads to her attempting to kill Jerry's children.