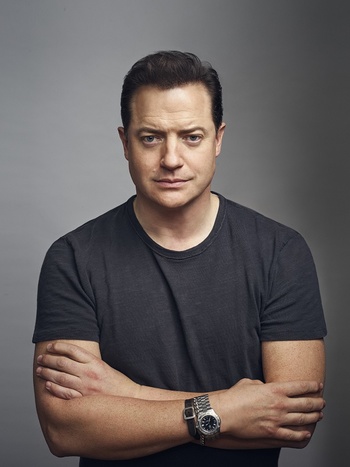 "All you have to do is just believe in what's there; then, the audience will, too."
Advertisement:

His Gods and Monsters co-star Ian McKellen once remarked that he wished to one day be as good an actor as Fraser. However, Fraser established his career starring in blockbuster films, sometimes seeming to prefer them over 'serious' pictures

He starred in The Mummy Trilogy, the live action George of the Jungle remake, along with the similar Dudley Do-Right remake, Blast from the Past, Looney Tunes: Back in Action, Airheads, the 2008 Journey to the Center of the Earth, Furry Vengeance, Encino Man, and many other silly or high-budget pictures.

He's also been in some lesser known and more serious films such as Gods and Monsters, The Air I Breathe, The Quiet American and School Ties. Fraser has dabbled in theater a few times, including an acclaimed turn as Brick in a West End production of Cat on a Hot Tin Roof in 2001. Between the two extremes lie films like Inkheart and Monkeybone, and his role as Ben Sullivan on Scrubs. He also voices Robotman (and plays his pre-cyborg self) in the DC Universe series Doom Patrol and has quickly been adopted by DP fans as THE voice of Cliff.

His career slowed in the early 2000's

due to a combination of chronic injuries from performing his own stuntsnote necessitating extensive surgery and physical rehabilitation, emotional trauma stemming from a sexual assault, and industry backlash after he spoke out against his assaulternote he alleges that Philip Berk, President of the Hollywood Foreign Press Association, molested him, and the industry rallied around Berk instead of him. He's since slowly begun rebuilding his career taking on supporting roles in smaller films and television productions. Fraser will also appear in Martin Scorsese's Killers of the Flower Moon and play the lead in Darren Aronofsky's The Whale much to the delight of fans who have affectionately dubbed his return "the Brenaissance".

His surname is pronounced with an 'S' sound, not like Frasier, as he explained in a Comedy Central bumper ("If you say Frasier, I know where you live"note Like Razer from Robot Wars, only "fr" instead of just the R.). He speaks French fluently (as you can see in Blast from the Past). Mo from The Inkworld Trilogy was based off him in physicality, which later caused him to be cast as that character in The Film of the Book. He even voiced Taz and the Tasmanian She-Devil in Looney Tunes: Back in Action. Outside of acting, he's an avid photographer and camera collector. The cameras he used as Ben on Scrubs were from his personal collection.