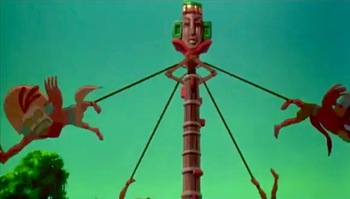 South of South of the Border (because Mexico is the only Latin American country in many North Americans' minds), this is the version of the rest of Spanish, Portuguese and very rarely French speaking countries of America in fiction. That's in case there is even a non-Spanish speaking one, because everybody knows that The Capital of Brazil Is Buenos Aires, right?

One big country with different names at best, where the temperature is warm all year round, the buildings are old and rustic, Christianity really is Catholic, and everyone is dirt poor outside of The Cartel and the petty military dictator whose megalomania is inversely proportional to the actual power of his armies (still beats life in Africa, though). Where the universally brown population is made of Tall, Dark, and Handsome Latin Lovers, feisty well-figured women, simple but magnificently moustached men, Street Urchins, and more American missionaries, doctors, scientists and naive tourists than you can shake an M16 at. Also a good place to find great big wildlife, be it of Earth origin (American or not) or extra-terrestrial.

The Banana Republic part is now fairly inaccurate in Real Life. It's rather a historic penchant for getting in this kind of situation

that created the trope. Nothing to do with Ancient Rome.

If you mix this trope with a shot of Tropical Island Adventure, you get Cuba, the Dominican Republic and Puerto Rico, and if you add a strong dose of Welcome to the Caribbean, Mon! to that, you get Haiti. If you mix it with a shot of Holiday in Cambodia and/or East Indies, and substitute basketball for The Beautiful Game, you'll get something like the Philippines, though for what it's worth, that country is mixed with so many and so disparate cultural influences—owing to nearly 500 years of Western colonialism more pervasive than almost any other country in its region—that it's a challenge to even represent at all, let alone accurately, in most media; for one, almost all its ancient structures are Catholic churches. Because of this, among other reasons, the country comes off as looking like Asia's own special piece of Latin Land.