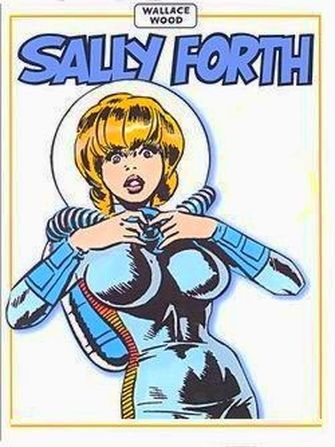 Sally Forth is the name of both a comic written by Wallace Wood and one of the comic's main characters. Sally Forth was published from 1968 until 1974 intended for US soldiers stationed overseas, and as such, had to prominently feature some female protagonist, resulting in Sally, officially a member of the military, spending most of her time out of her clothes, a predicament not necessarily dictated by the scenario. The strip first appeared in the June 1968 Military News tabloid from Armed Forces Diamond Sales; the strip later moved to Overseas Weekly, a tabloid for US servicemen serving outside North America, until April 1974.

While Sally is the title character, the main 'character' is in fact a unit of five soldiers: Q.P. Dahl (the brain), Wild Bill Yonder (the eyes), Kicky McCann and Hairy James (both muscle), and Sally Forth (archetypal blonde). They were also joined by the martian Snorky for a while.

Note that, aside from the omnipresent nudity of most female characters, Sally Forth was not a pornographic comic—the stories themselves tended towards comedic action-adventure, and there was nothing more sexual than flirting.note In the original run of the comic that is; Wood did do some X-rated Sally stories in his "Gang Bang" adult comic Sally was silly fluff, good-natured fun.

Not to be confused with the other Sally Forth comic.

Sally Forth contains examples of: