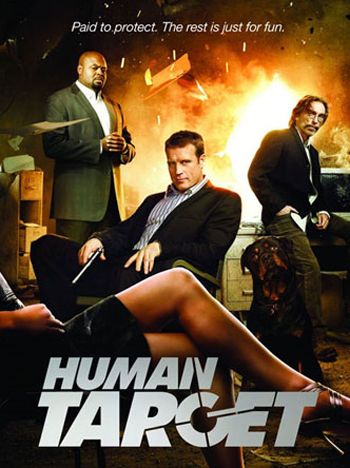 Yes indeed.
"I work with a cover, blend in to the background, let you appear vulnerable so the threat reveals itself and then eliminate the threat."
— Christopher Chance when he explains to his client in "Pilot" on why he has a unique approach to protective security.
Advertisement:

Human Target is the story of Christopher Chance, a bodyguard and private detective for hire who impersonates his clients in order to draw out whoever is threatening them and 'eliminate' them. It has its roots as a DC Comics comic book, and has been adapted as a TV series twice: once in Summer of 1992 on ABC, and another that premiered in January 2010 on FOX.

The 1992 series consists of seven episode only. There's currently no official release for home media.

The 2010 series was cancelled after two seasons. A DVD and Blu-Ray release of Season 1 is out. Season 2's release is in the work, because of supposed problems in clearing music rights prior to DVD and Blu-Ray production.

As of 2013, Warner Home Video has not said anything about an official release of Season 2, although both seasons are legally available for viewing consumption via Amazon, iTunes and the DC Universe app.

The 2010 series provides examples of: