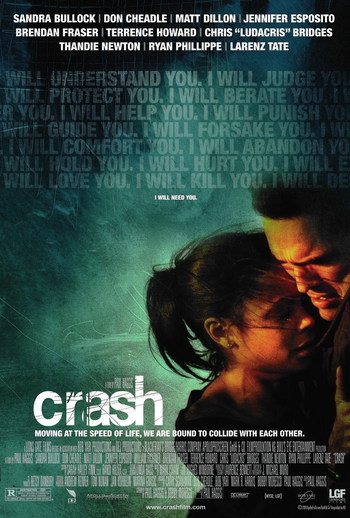 "It's the sense of touch. In any real city, you walk, you know? You brush past people, people bump into you. In L.A., nobody touches you. We're always behind this metal and glass. I think we miss that touch so much, that we crash into each other, just so we can feel something."
— Det. Graham Waters
Advertisement:

If you're looking for the J.G. Ballard novel which inspired a completely different film directed by David Cronenberg, go here. If not, read on.

Crash debuted at the 2004 Toronto International Film Festival. It saw general release the next year and was the Academy Award winner for Best Picture of 2005.

This ensemble drama, directed by Paul Haggis (who co-wrote the screenplay with Bobby Morseco) and featuring an All-Star Cast, addresses racism affecting the lives of several Los Angelenos as they intersect over several days' time. The incident that starts it all off is the carjacking of a white couple, the Cabots, by two black carjackers, Anthony and Peter...