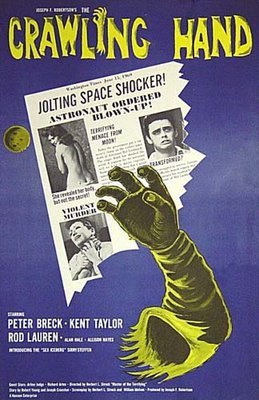 Astronauts keep going crazy and blowing up on their way back to the ground, and scientists can't figure out why. The latest astronaut to fall to this mysterious syndrome manages to contact his scientist superiors just before doing himself in; he alternates between pleas to "push the red" Self-Destruct Mechanism and violent urges to "Kill! Kill!" Finally the "red" is pushed, the astronaut is blown to shards and the scientists are still stumped.

Meanwhile, over in California, young med student Paul frolicks on the beach with his girlfriend when they happen upon the severed arm of the dead astronaut. Against his girl's wishes, Paul returns to the beach and takes the arm home with him (for what reason, we're not told). Soon, it becomes apparent to everyone (in the audience, at least) that whatever malediction had possessed the astronaut still possesses the arm, which promptly goes on a killing spree (said spree resulting in a grand total of ONE death). Paul himself is a prime suspect in the murder, but the two scientists arrive with their own theories. Then the mysterious murderous force begins to infect Paul as well, and he attacks a Malt Shop owner and his own girlfriend. After realizing what he's doing, Paul takes the hand out to a junkyard with the intent of destroying it, and between a fever of over 100 and some hungry cats, the evil is defeated... er, handily.