All Muslims Are Arab 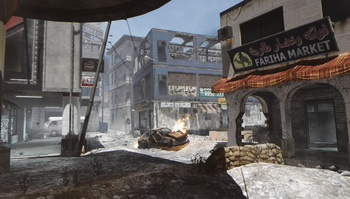 Notice anything wrong ?Explanation The signboards are written in Arabic, despite the fact that the map is set in Pakistan, where Arabic isn't spoken as a native language and it would have instead made sense to have the signboards in Urdu or English.
"Look what they wrote. They think we’re Arab. When did Persian become Arab?"
— Shereen (reading graffiti on her store wall after it's vandalized), Crash

Because most well-known examples of fictional Muslim characters and settings in mainstream media tend to be from North Africa and the Middle East, there is an assumption that Muslims are all Arabs or speak Arabic as their main language. This is despite the fact that the largest Muslim population in the world is in Indonesia, which is located in Southeast Asia, and many Muslims come from all over Asia (as a matter of fact, the region with the largest number of Muslims overall is in fact, South Asianote Afghanistan, Bangladesh, Bhutan, British Indian Ocean Territory, India, Maldives, Nepal, Pakistan, and Sri Lanka, which has more than 630 million Muslims. Meanwhile, the Middle Eastnote Akrotiri and Dhekelia, Bahrain, Cyprus, Egypt, Iran, Iraq, Israel, Jordan, Kuwait, Lebanon, Oman, Palestine, Qatar, Saudi Arabia, Syria, Turkey, United Arab Emirates, and Yemen has less than 410 million Muslims), Africa, and Europenote Before you say "they're immigrants", no, not all European Muslims are immigrants. Muslims of the Volga (Tatars, Bashkirs, etc.) and Caucasus (Avars, Azerbaijanis, Chechens, Circassians) date back to the 12th-15th century, while Muslims of the Balkans (Albanians, Bosniaks, Pomaks, etc.) date back to the 17th century. and do not consider themselves Arabs. Even within the Middle East exist a multitude of ethnic groups who practice Islam and speak a variety of different languages, such as Kurdish, Persian, and Turkish which belong to totally different language families from Arabic.note Arabic belongs to the Afroasiatic family of languages along with Hebrew, Maltese and Tamazight/Berber; whereas Kurdish and Persian are Indo-European, making them more closely related to Hindi, English, and Latin, while Turkish belongs to Turkic, an East Asian language family that got stranded in the Middle East because of medieval-era politics and migration. In other words, totally alien to the region. Likewise, North Africa — another region that has been largely Arabised in terms of language and culture — still has plenty of people who identify more with the pre-existing Amazigh/Berber languages and cultures, and the line between "Arab" and "Amazigh" can be blurry there.

The trope most often affects Iran and Turkey, two emerging markets and regional powers who frequently make international headlines, as they happen to be (1) Middle Eastern, and (2) majority-Muslim. Even Muslims from far-off places sometimes lump them both as Arab countries, because, barring their distinct languages, their culture do overlap a bit with their Arab neighbors and you have to be rather well-versed in Middle Eastern studies to be able to distinguish them, something that the common folk just don't care, it seems. To make matters worse, Iran officially writes using the Arabic script,note Albeit one that has additional letters not found in the original, since Iranian languages have a different set of consonants compared to Arabic. a legacy of when it was ruled by Arabs more than a millennium ago. Turkey's situation is a bit better, but then you will run into problems of explaining exactly what Turkish culture is, especially as their language is not only alien to the West but also the Middle East itself. In the region, Turkey has a love-hate relationship with the Arab countries, because it used to rule vast swathes of the Arab world for centuries

; needless to say, some Arabs still regard Turkey and Turks in general as a colonizer. As for Iran... well, as the page quote shows, it's best not to lump it with Arabs. Really. If you want a picture, imagine the Greeks' view of themselves compared to Turks, but magnified tenfold. Iranians will happily lecture you on how magnificent their culture

is and how long their history

dates back if you do so.

Complicating this issue is that scholars of Islam are expected to learn Classical Arabic in order to understand the Quran, since there are no official translations into other languages due to the belief that some of the meaning would be lost in translation; therefore Muslims who take their faith seriously often do understand Arabic in some form, even if it is not their main tongue. Cultural influences also mean that many non-Arab Muslims understand and use Gratuitous Arabic phrases in everyday life (e.g. Assalamualaikum, a catch-all greeting; or Alhamdulillah, the equivalent of and used in the same situation as "Hallelujah"), which might create the assumption that all Muslims know Arabic, when in fact, they do not.

Compare Latino Is Brown, All Jews Are Ashkenazi. The inverse of "All Arabs are Muslim" is also a massive Berserk Button for Arab Christians and Jews, especially if they are from the Levant (Lebanon, Syria, etc.) given that their ancestors were likely practicing Christianity and Judaism in the faith's homeland far longer than anyone else. In fact, in some countries like Brazil, the Arab population that hails from the Levant is likely majority Christian instead of Muslim.

Note that this trope is not about the simple presence of Arab Muslims in a work, but rather about the implicit or explicit assumption that all Muslims are of Arab descent (e.g. by having Muslim characters speaking Arabic in casual conversation where their background and/or time period would make this improbable). Please do not add examples along the lines of "Character X is Arab" when it is nothing remarkable. Similarly, it's not worth listing an "aversion" if a work just happens to have a Muslim who is Indonesian, Turkish etc.