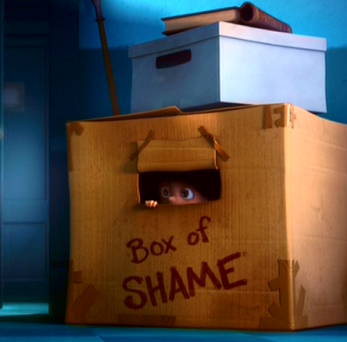 Our protagonist is in a Chain Gang prison and has violated one of the Corrupt Hick sheriff's rules. So they send him to the Punishment Box (more commonly, "The Box.") The Box is commonly a small metal shed in the middle of the compound, exposed to sun. They put you in and you are tortured by sweating it out in 120-plus degree heat, basically frying you alive. Unless it's a cold night, in which case you have to keep from freezing to death.

Various forms of this have been an unfortunate Truth in Television (see The Other Wiki for a few examples), which is probably where the trope originates from.

Although the box could be made of cardboard, especially in comedic examples, this is not to be confused with Cardboard Prison. See also Iron Maiden, which is even less beneficial to your health, and Closet Punishment.